on May 31, 2021
Jim alerted me Saturday that he and a friend would be out scouting for photo spots. I weaseled my way into going along and we agreed to meet up at his place at 9am. I had been telling Jim about a little water crossing I'd found in Loudoun County, and thinking about the rain we had this week, I thought it might be a little high for us to cross. Just in case we tried it and failed, I went ahead and tossed my tow straps in the Tuffy security drawer, just in case.
After all - you never know what will happen.
On Sunday, we met up with photographer friend David. David is retired from the US Army, and while in law school at Iowa State, he also freelanced as a sports photographer for the college paper as well as local papers in the area. His work is amazing.
After about an hour, we had been cruising some dirt roads around Loudoun County and ended up at a ford which crosses the Butchers Branch stream. There had been some recent rain, so we weren't sure how the water would be. I had driven it two weeks before, and the water was low.  So low that I was easily able to pick out the ideal route across it. I had crossed this ford once last summer in water that was higher than this and nearly got stuck in a hole in the middle -  a liberal application of the right foot resulted in just a little water over my hood, in the vents and on my shoes. Fortunately, I did not stall out or get stuck.
When we arrived, the water was higher than the previous week, but not fast, not moving and not too high. This was a good sign. I checked it out, and then ventured across with David. The crossing was straight forward and David was able to get some good shots of both Jim and I crossing.

We continued on, and not 50 yards from the bank was this classic red barn with an American flag. We naturally stopped for a few photos there and what did we see coming behind us, but a FedEx truck. We thought for sure he would stop, or perhaps knew the correct path for crossing the ford. We excitedly ran towards the banks in time to see that he did not in fact know the correct route and had become stuck. Not only that, but he appeared to have ingested some water and stalled his motor.

Having now navigated this crossing twice today, I was confident we could get our newfound friend unstuck. I informed him that I'd be happy to pull him out, but that he'd have to find his attachment points. I believe my exact words were "I'll pull you out, but I'm not getting wet". He informed us that there were two tow points on the back of the truck, so I drove across thinking we might find success there.
Upon my arrival, it quickly became clear that this was a dead end. No such rescue would be possible.  The back end of the truck was dug into the bottom of the stream like a tick and there was no chance we would get attached.

I made my way back across Butchers Branch, and we began assessing what our options would be for pulling the FedEx truck out of its predicament.
At this point, the FedEx man started looking for attachment points. Jim, ever the charitous soul, ventured farther and farther into the mire, until he could no longer tolerate the misguided attempts by our bumbling FedEx driver to attach the tow strap.

Removing both his socks and shoes, and then rolling up his trousers - our man Jim proceeded out into the water to assist the hapless FedEx driver in his quest to attach the recovery straps.

Jim made quick work of the attachment, and we proceeded to attach to the D-ring held to my defender by the Class 3 North American Specification rear step. A part acquired from Rovers North several years prior, and which had finally found its time.

Putting the defender into low range and locking the center diff, I began the application of throttle. The tires spun a bit and the Detroit Truetrac differentials locked - all four wheels were spinning in the sand and gravel, but we were making progress. The Defender 90 slid to the right a bit as she pulled, but the 200 TDI and Variable Geometry Turbo from Allisport  did their work. In no time we had the FedEx truck extricated, and pulled out of the roadway to safety.
The commotion concluded, we proceeded with out photo session

After which we made our way to the lovely Dirt Farm Brewing for some well deserved celebratory libations and one of the best views of Bluemont, VA and Loudoun County to be found. Our entry must have made quite an impression, as a guest came to show her Defender 90 tattoo and give some much needed love to my neglected labradoodle Copper. 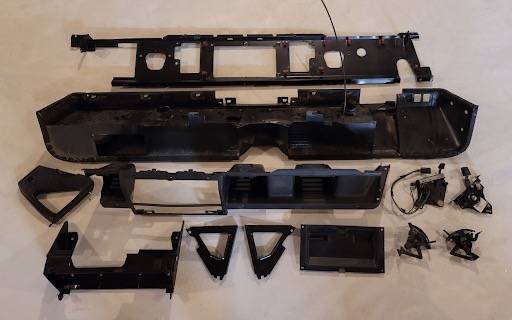 For those catching up anew - a few posts to get you up to date: The Beginning Lets get a look at what we have here Slow & Steady Progress It Lives! New Windows - all around While February was a slow month for posting updates - plenty was getting done. This project has become a balancing game of logistics and parts - currently #66 exists as a (kindof) functioning vehicle - but one that has irreparable rust damage to the frame and bulkhead.  Accordingly, I've worked with Rovers North  to order a factory new frame from Jaguar / Land Rover. This frame will come from the factory stamped with the VIN for #66, and will be the baseline from which we build up. While we wait on the frame, I'm having a NAS 110 buklhead stripped, and it's off to the body shop to have repair work done . When that is complete, we'll be bolting a Td5 era dash on. What's being replaced: OEM JLR Puma chassis / frame Puma doors (front, second row and rear) Td5 Dash 110 Litre (30 Gallon) stainless 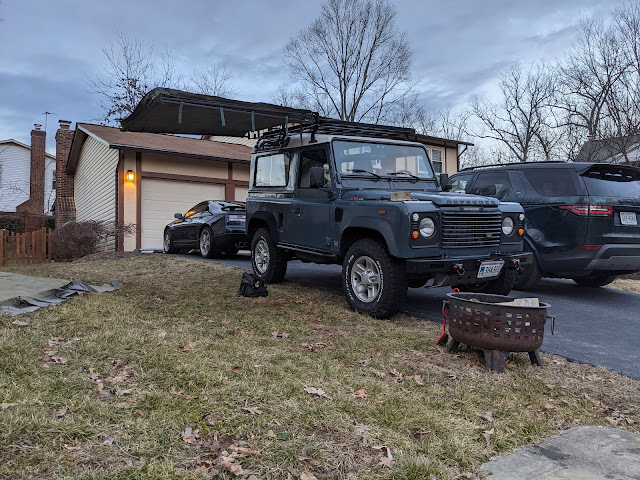 I bought this Defender 90 in September of 2017. It was imported from Spain, and I purchased it in Tampa, FL.  I flew down and brought it back up on the auto train to Lorton, VA.  With a 25 year old truck, there's a lot of deferred maintenance, as well as correction of some mistakes by the last few owners. Suffice it to say I was only marginally confident that my truck would make the three and a half hour drive from NoVA to Doug's place, but am now confident I could drive this truck just about anywhere in North America. There are a few maintenance items I'll continue to work on, but Doug was able to get me to a comfortable starting point. There were three major areas of focus for this project - Engine, electrical/interior and axles. Engine Upgraded Allisport VNT Turbo Aftermarket Intercooler replace radiator water pump  thermostat glow plugs timing belt and tensioner Adjust valves  set idle and timing set fueling for new turbo This 200tdi now runs like a top and pulls like a